NDRAC is very sorry to hear the news of the passing of Richard on Monday 26th November. We have lost a great friend and the disability sector in Papua New Guinea has lost a great advocate. Our thoughts are with your family and friends at this tragic time. Your bravery will continue to inspire us and many others. Rest in Peace Richard. God Bless. 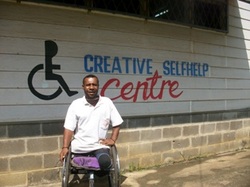 Richard Gambu, NDRAC's PNG Games reporter
NDRAC has teamed up with Richard Gambu to provide daily updates on this years PNG Games in Kokopo, East New Britain. We will be updating this page via SMS messages from Richard who is competing in the games. We will also be updating our Twitter account - https://twitter.com/PNGdisABILITY. Please follow us!

Richard is a subsistence farmer. He is also the Chairperson of a Self Help Organisation (SHO) called the Ability Reliance Centre, which was established in 1999 in order to bring people with disabilities (PWDs) together to advocate for better services for PWDs in their District. Ability Reliance works in partnership with larger NGOs (VSO, World Vision) to help them reach PWDs at the community level. Richard also supports the establishment of Disabled People's Organisations (DPO) in Usino Bundi. 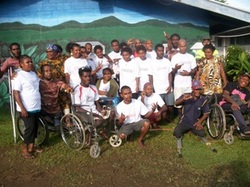 Team Madang come together at Creative Self Help Centre before departing for Kokopo.

Good night bro, our disabled athletes was divided into 2 groups for travelling. I was in the 1st group: 15 athletes, plus two escorts and 2 coaches. Weather has been cool today. We are travelling with Travel Air - Madang - Lae - Rabaul, Tokua airport. Our residence for the games is Baliora Primary School, very nice welcome for Team Madang. Unfortunately, the ablution and the accomodation is not accessible for us, the 4 wheelchair users. We search for some other accomodation in Kokopo but nothing left so we came back to base... 10q... (R.G)

Good night bro. Sunday is a very hot day here in Rabaul. Pastor Eremas is the school Board Chairman and also the Chaplain here. He provided 1hour Sunday Services (8am - 9am) for us Team Madang. At 11:30am our 2nd Madang Disability Team arrived at Tokua airport, they were also transported to Baliora Primary School. Our 2nd Disability Group consists of 12 athletes, 2 volunteers, 1 team coordinator. We arrange orselves into two seperate classrooms, male and female. The sleeping condition is OK now...10q...(R.G)

SMS from Richard Gambu 11:51am

We're in our team colours, lining up and going into the opening ceremony now!

Good night bro. It's really a colourful day today. Opening ceremony started at 11am at the Kalabon field. The archbishop of Rabaul, opened the ceremony with a prayer. The Prime Minister, Mr Peter O'Neil was escorted by police to the grandstand, opening the ceremony after the prayer. There are some Government Ministers and Provincial Governors involved in the opening speeches too. They welcomed all the Provincial Teams and special mention to the two new Provinces taking part - Hela and Jiwaka Province. The heavy rain started at 3pm disturbing the ceremony. We all getting wet and transported home at once. I'm feeling cold and sleep early bed...10q...(R.G) 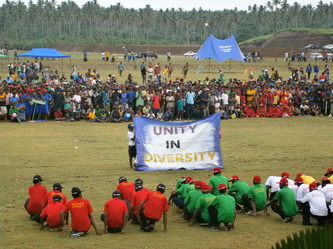 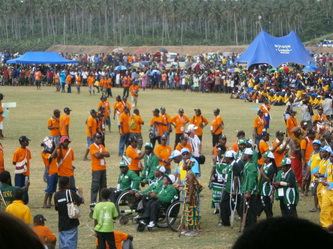 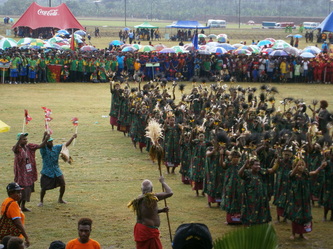 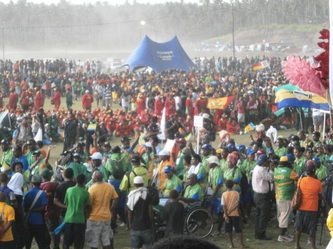 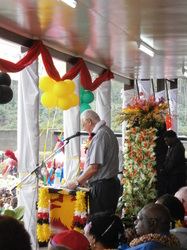 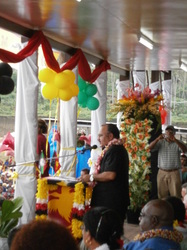 Radio Australia contacted NDRAC via Twitter to get in touch with Richard Gambu to get his experience of the Games.

Good night bro. Some sporting codes started their games today but Paralympics Sports not started yet. All the Madang Sporting codes Coordinators and Team Managers having a big meeting. Our Coordinator, Markus Apo (CBR Officer, Creative Self Help, Madang) arrived back at our camp in the afternoon,  sorting us out into different disability classes according to certain types of sports we're playing. I'm not happy with the Power Lifting programme and won't take part in that event, because the event will be played generally, all athletes at once! Not classified into weight divisions (kg).

For your information: I was interviewed by Radio Australia - PNG Service at 10:24am. The reporter will interview us again on Thursday. Heavy rain started today at 3pm and carried on until night but everything is OK...10q...(R.G).

Good night bro. Some ball games kicked off yesterday (tues) but ABILITY Sports will start on Sat 24th. Today, we travelled to Yunapope, Callan Services to get classified in different disability categories against our own class in the World Record. This activity was done today between 1pm - 5pm. Then we travelled home. There is no activity tomorrow morning. I feel sick due to standing in the rain during the opening ceremony on Monday. I have taken some tablets already and am resting now...10q...(R.G)

Good night bro. Today is a rainy day, makes boring for all of us with no activity. Only the Team Managers are out for meetings. Some of our Madang Disabled athletes arrived today via Travel Air. The new groups consists of 2 officials, 1 doctor and 9 athletes. Ability Sports will be played on Saturday...10q...(R.G)

Good night bro. I'm the only one taking part in Disabled Power Lifting. Due to malaria and cold, I forced myself but cannot lift anymore...(R.G)

OTHER NEWS UPDATE: Shirley Moiga, Eastern Highlands Disability Officer won GOLD in her class in the Power Lifting. Read more about Shirley in our next addition of The Network.